West Bengal, which is viewed as a key battleground, has never been ruled by Modi’s Bharatiya Janata Party (BJP), despite aggressive campaigning and massive rallies.
Mamata Banerjee, 66, is set to be the chief of West Bengal for the third time after her Trinamool Congress party (TMC) won a two-thirds majority, taking more than 200 seats in the 294-seat state assembly, election commission officials said. Final counting for some seats was still ongoing.
Banerjee is now India’s only woman chief minister.
West Bengal Chief Minister Mamata Banerjee shows the victory sign after the announcement of state election results in Kolkata on May 2.
Despite the defeat, the BJP made substantial gains and became the main opposition party. Its tally in the state legislature went to nearly 80 seats, compared to just three seats won in the last state election in 2016.
The results are seen as a test on whether the second wave of Covid-19 has impacted support for Modi and the right-wing BJP.
Modi, his colleagues and regional politicians campaigned in five state elections, including West Bengal, despite the second wave of Covid-19 — prompting criticism the Prime Minister was focusing on elections instead of making the pandemic his top priority.
Some experts blame the federal election commission for allowing rallies and voting in which large crowds flouted rules on social distancing and mask-wearing.
Banerjee, a sharp critic of Modi, largely conducted a one-woman campaign to retain power by leading scores of public rallies.
“It is a stupendous performance by Mamata Banerjee because Modi was determined to win Bengal, but it’s clear that his entire political machinery and strategy was unable to defeat her,” said Diptendu Bhaskar, a political analyst in Kolkata, West Bengal’s capital.
After the final tallies were released, Modi congratulated Banerjee in a tweet on Sunday evening. “The Centre will continue to extend all possible support to the West Bengal Government to fulfil people’s aspirations and also to overcome the Covid-19 pandemic,” he wrote.
In northeastern Assam state, the BJP managed to retain power. In Tamil Nadu, victory went to the DMK, the main regional opposition party.
In Kerala state, the ruling leftist political party was set to form government while the BJP led-alliance won no seats. In the union territory of Puducherry, the All India NR Congress-led alliance was leading in 14 of the 30 seats assembly.
Most of the votes were cast in March, but polling in some constituencies continued through April, just as India started to detect thousands of new coronavirus

“We don’t yet have all of the facts but we do know that a 16-year-old girl, a child of this community, tragically died last night,” Columbus Mayor Andrew Ginther told reporters.
“Bottom line: Did Ma’Khia Bryant need to die yesterday?” he added. “How did we get here? This is a failure on the part of our community. Some are guilty but all of us are responsible.”
Police body cam video shows Ma’Khia Bryant charging woman with a knife Tuesday before she was shot by officer in Columbus, Ohio.
Ginther said state investigators will determine “if the officer involved was wrong, and if he was we will hold him accountable.”
Police identified the officer who fired the shots as Nicholas Reardon, who was hired in December 2019. The officer is off street duty pending an investigation. Calls seeking comment from the police union have not been returned.
The fatal shooting comes at a time when police use of force around the nation — and in Columbus specifically — is under new scrutiny. In February, former Columbus police officer Adam Coy was indicted on charges related to the fatal shooting of Andre Hill, a 47-year-old Black man. 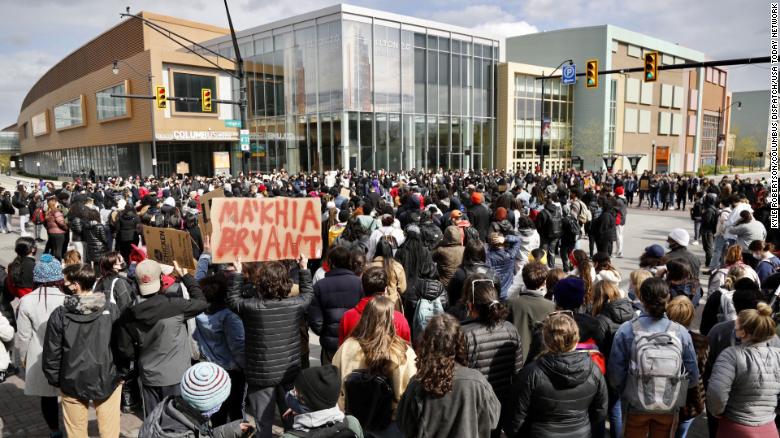 Officials said the Indian naval ship Suvarna intercepted the Lankan boat “DU Shashila” in the high seas of the Indian Ocean on suspicion of drug trafficking and brought the boat to Kochi’s Mattancherry Wharf for an extensive search by the NCB.

Each of the 340 packets had been stamped with a crown symbol with the words “KING 2021”, a practice followed by drug trafficking syndicates to brand their merchandise, NCB said.

The suspect, an employee at the Kent Moore Cabinets location, has been arrested

One person was killed and five people were wounded in the wake of a shooting at a cabinet-making business in Bryan, Texas, authorities said, and a state trooper was later shot during a manhunt that resulted in the suspected shooter being taken into custody.

Bryan Police Chief Eric Buske told reporters on Thursday he believes the shooting suspect is an employee at the Kent Moore Cabinets location. The shooting happened in the bays in a plant where employees make cabinets.

Mr. Buske said a motive in the shooting was not clear.

The shooter was gone by the time officers arrived, Buske said.

Grimes County Sheriff Don Sowell said a male suspect in the shooting was arrested in the tiny town of Iola, about 48 km way from the cabinet plant.

The state trooper who was shot while pursuing the suspect was is in serious but stable condition, the Texas Department of Public Safety said on Twitter.

Kent Moore Cabinets employees were being interviewed, Bryan Police Lt. Jason James said earlier, and witnesses had identified a suspect. Police were looking for the suspected shooter, James said, but he could not describe that person.

“At this site, when law enforcement showed up it was already over with,” James said.

The Bureau of Alcohol, Tobacco, Firearms and Explosives has sent agents and dogs to the scene of the shooting, said spokesman Deon Washington.

Police asked people to stay away from the business during the investigation.

Bryan is about 160 km northwest of Houston. The city of more than 86,000 residents is a market, industrial and medical center for the middle Brazos River valley with a economy centered on the university in adjacent College Station and its related agribusiness; computers, research and development. It also is the seat of Brazos County.

Kent Moore Cabinets is headquartered in Bryan and employs more than 600 people across the state, according to the company’s website. The company makes custom cabinets and has design centers in neighboring College Station and nearly a dozen Texas cities.

A person who answered the phone Thursday at Kent Moore Cabinets’ headquarters said she could not provide any information on the shooting.

“I have been working closely with the Texas Department of Public Safety and the Texas Rangers as they assist local law enforcement on a swift response to this criminal act. Their efforts led to the arrest of the shooting suspect.”

As many as one in three people infected with Covid-19 have longer term mental health or neurological symptoms, researchers reported Tuesday.

They found 34% of Covid-19 survivors received a diagnosis for a neurological or psychological condition within six months of their infection, according to the study published Tuesday in the journal Lancet Psychiatry.
The most common diagnosis was anxiety, found in 17% of those treated for Covid-19, followed by mood disorders, found in 14% of patients.
And while the neurological effects are more severe in hospitalized patients, they are still common in those who were only treated in an outpatient setting, the researchers note.
“That rate increased progressively as the severity of the Covid-19 illness increased. If we look at patients who were hospitalized that rate increased to 39%,” said Maxime Taquet, an academic clinical fellow in psychiatry at the University of Oxford, and a co-author of the new study.
The results help light the way for how the healthcare system ought to continue helping Covid-19 survivors, the researchers said.
“Our results indicate that brain diseases and psychiatric disorders are more common after Covid-19 than after flu or other respiratory infections, even when patients are matched for other risk factors. We now need to see what happens beyond six months,” Taquet added.
Covid-19 as a ‘brain disease’
It’s the largest study of its kind yet and involved the electronic health records of more than 236,000 Covid-19 patients, mostly in the US. The researchers compared their records with those who experienced other respiratory tract infections during the same time frame.
They observed that those with Covid-19 had a 44% increased risk for neurological and psychiatric illness compared to people recvering from flu. And they were 16% more likely to experience those effects compared with people with other respiratory tract infections.
About one in 50 Covid-19 patients had an ischemic stroke, which is a blood clot that affects the brain
However, Covid-19 didn’t necessarily increase the risk for the full spectrum of neurological illness.
“Two important negative findings were related to parkinsonism and Guillain-Barré syndrome,” Taquet said. “Both of those conditions are neurological conditions that we know are sometimes associated with viral infection. We did not find that they were more more common after Covid-19 and after the other respiratory tract infections that we looked at.”
The study was important, in part, because of the sheer number of patient records the researchers were able to analyze, according to Dr. Musa Sami, a clinical associate professor in psychiatry at the University of Nottingham.
“This is a robust piece of work in a large cohort demonstrating the association between Covid-19 and psychiatric and neurological complications,” he said in a statement. “This is a very important topic as there has been considerable consternation regarding Covid-19 as a ‘brain disease.’
Sami, who was not associated with the study, highlighted the need for further investigation into how, exactly, Covid-19 affects the brain and nervous system. “Psychological stress, longer stays in hospital, and characteristics of the illness itself may play a part,” he said.
One clue: psychological symptoms are more common than severe neurological complications, according to Masud Husain, a professor of neurology and cognitive science at the University of Oxford, and a co-author of
the study.
“It’s really the people with very severe illness who are at higher risk of developing the neurological complications, unlike what we see with the mental health complications, which is much more across the board with severity,” he said.
Other, smaller studies have pointed to the result. One study in February followed 381 patients treated for Covid-19 at a hospital in Rome, Italy and found that 30% of them experienced post-traumatic stress disorder after recovery.
A December study in the journal Neurology: Clinical Practice showed that Covid-19 could cause seizures and movement disorders, even in some moderate cases.
.Covid-19’s longer term burden on the health system
One limitation of the Lancet Psychiatry study is that it uses “routine healthcare data,” rather than research data, according to Paul Harrison, a professor of psychiatry at the University of Oxford, and the study’s lead author.
That could mean that diagnoses are missing, they haven’t been fully investigated, or that they are incorrect.
And just having been diagnosed might make a difference.
“Patients that had Covid-1919 might be more likely to have a neurological and psychiatric diagnosis, simply because they received more follow up, more medical attention, compared to patients with the respiratory tract infections. That might account for some of the differences that we’ve observed in the rates,” Taquet told a news briefing.
But still, the study provides a sweeping view of the long term burden the pandemic will have on those it struck.
“Although the individual risks for most disorders are small, the effect across the whole population may be substantial for health and social care systems due to the scale of the pandemic and that many of these conditions are chronic,” Harrison said. “As a result, health care systems need to be resourced to deal with the anticipated need, both within primary
and secondary care services.”

COLOMBO (News 1st): The two bowsers of substandard Coconut oil seized by Sri Lanka Police in the Divulapitiya area will be handed over to Sri Lanka Customs on Wednesday (Mar. 31) for further investigations.

The two bowsers will be handed over to Customs officials in Colombo today (31), Sri Lanka Police said.

Investigations are underway to determine whether the two bowsers of Coconut oil seized during operations in Divulapitiya are of the consignment that was ordered to be re-exported given the substandard quality, Police further noted.