Dates have been set for the G. C. E Ordinary Level Examination for the year 2021, the Ministry of Education announced.

Accordingly,  the examination will be held in early 2022, Minister of Education Prof. G. L. Peiris said.

Reportedly, the flights had touched down at the Bandaranaike International Airport (BIA) a short while ago.

The new batch of vaccines brings the total amount of Sinopharm jabs received by Sri Lanka to 9.1 million.

There is a risk of the Delta variant of the coronavirus being prevalent in Sri Lanka in the near future, State Minister of Production, Supply and Regulation of Pharmaceuticals Prof. Channa Jayasumana said.

He pointed out that many variants of the coronavirus are spreading across the globe.

Thereby, Jayasumana added, that the Delta variant could spread within Sri Lanka too.

The State Minister mentioned this speaking to the media in Anuradhapura.

“The Delta variant is becoming the dominant variety all over the world. Therefore, we cannot think that only Sri Lanka will be able to avoid it. We can expect that in the future the Delta variant will become more prevalent in our country.”

He also spoke on the importance of vaccination against the virus.

“Scientists have shown that the Sinopharm, AstraZeneca, Moderna, Pfizer, as well as the Sputnik V, vaccines offer protection against the Delta variant. People who receive the vaccine are less likely to be affected by the Delta strain, even if they have an infection. Therefore, vaccination is very important.”

Speaking further, State Minister Jayasumana said that Sri Lankan authorities are closely monitoring the new developments of the virus around the world.

number of countries. We are keeping an eye on all this.”

Cardinal Malclom Ranjith together with several bishops of the Catholic church in Sri Lanka in a letter addressed to President Gotabaya Rajapaksa has requested him to provide a credible answer to all the questions that the church has raised on Easter Sunday attacks and take action against those who are responsible for it within one month.

The letter signed by Cardinal Ranjith, Auxiliary bishops of  Colombo Rev J. D Anthony Jayakody, Anthon Ranjith, Maxwell Silba, bishop of Chillaw Valance Mendis, , Bishop Harlod Anthoney Perera, Raymond Wickramasinghe and few other priests said they will be forced to agitate for action through alternative means if their request is not met.

“We wish to inform you that if truth and justice cannot be assured in a satisfactory manner by the government and the issue is dealt with rather superficially, we will be forced  to agitate for such through alternative means. We hope you act on this urgently and provide a credible answer at least within one month of this appeal,” the letter signed by the bishops and the priests said.

In their letter cardinal, bishops and priests have requested that action should be taken against former President Maithripla Sirisena whom the presidential commission of inquiry had said there is a criminal liability in his part  and recommended criminal proceedings against him, former Prime Minister Ranil Wickremesinghe  whom the commission has said there is a serious act of reasonability for his soft approach on Islamic extremism, former Minister Rishad Bathiudeen , Riyaj Bathiudeen, Dr, Muhamed Zulyan Muhammed Zafras, Ahamed Thalith against whom the commission has recommended criminal procedures and bribery charges and certain n police officers, two officers attached to Attorney General’s Departmet and M. A. L. A M Hisbullah who had facilitated the spread of extremism in Kathankudi.

They have also urged the President to conduct fresh inquires to determine whereabouts of Sarah who said to have fled to India, to inquire and find out about the intelligence officer who had met Jameel who went to explode a bomb at Taj Samudra Hotel before he blew himself up in a lodge in Dehiwala, two determine who had got an intelligence officer who was arrested by DIG Shani Abeysekera stating ‘it was our project and t determine the who the person referred to as Sonic who had called the who had called the ISIS office asking them to accept the responsibility for the Easter Sunday attack. (Yohan Perera) 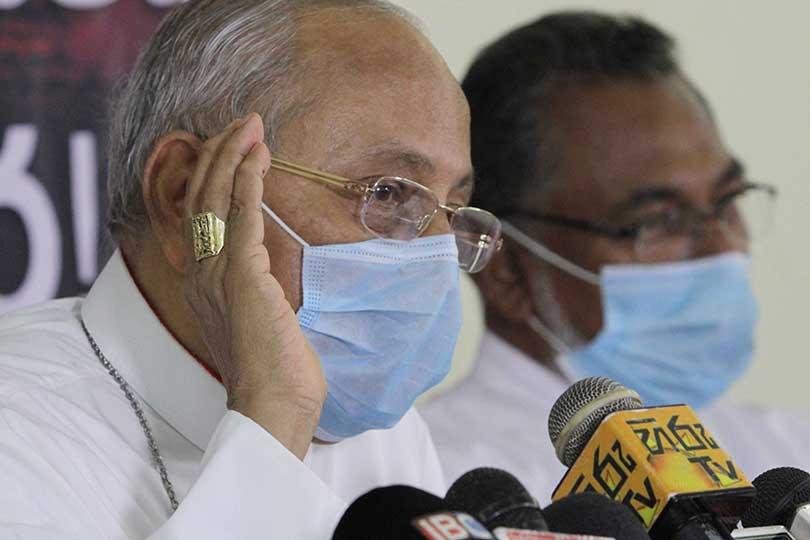 The vaccine consignment containing 50,000 doses have been handed over to the State Pharmaceutical Corporation (SPC) at the Bandaranaike International Airport (BIA) in Katunayake.

This is the fourth vaccine consignment delivered by the Russian government, in keeping with a purchase order placed by the SPC to boost the island’s inoculation drive.

Prior to the delivery of this consignment, Russia had sent three stocks of Sputnik V jabs within the last two months. The first batch containing 50,000 doses arrived on May 04 followed by the second batch comprising 50,000 doses on May 27. Sri Lanka later received 65,000 more doses in June.

The Sputnik V was the first COVID-19 vaccine to be registered for use in any nation, and it has since been approved in 67 countries.

The National Medical Regulatory Authority (NMRA) on March 04 approved the emergency use of Sputnik V COVID-19 vaccine in Sri Lanka.

However, the World Health Organization (WHO) and the European Medicines Agency (EMA) are still reviewing

The last stage trial results published in Lancelet medical journal in February revealed that the vaccine, developed by the Gamaleya National Research Center of Epidemiology and Microbiology in Moscow, gives 91.6% protection against SARS-CoV-2.

In late June, the Russian Direct Investment Fund (RDIF) announced that Sputnik V in the United Arab Emirates (UAE) was confirmed to be 97.8% effective among over 81,000 people. The analysis was based on the data collected by June 08.

As per reports, the vaccine can be stored at temperatures of between 2 and 8C degrees (a standard fridge is roughly 3-5C degrees).

Two doses are required to be taken 21 days apart in order for the vaccine to be effective. Unlike other similar vaccines like Pfizer-BioNTech and Oxford-AstraZeneca, the Sputnik V jab uses two slightly different versions of the vaccine for the first and second dose.

Although both doses target the coronavirus’s distinctive ‘spike’, each dose in Sputnik V contains a slightly different vector – the neutralised virus that carries the spike to the body. Scientists say this is beneficial because using two different vectors in a course of vaccination can help boost the immune system even more than using the same version twice.

COLOMBO (News 1st); The highest number of vaccine doses were administered on Wednesday (30), said the Epidemiology Unit of the Ministry of Health on Thursday (01).